I’m working on a Writing exercise and need support.

respond to the post, 120-160 words. You should come up with 2 questions to ask the author of the post below. It should be in FIRST person and you should relate to the author ( “hi, I enjoyed reading your post” etc). Say what you liked or didn’t like and come up with two questions.

3a) There is no doubt that Trump’s initiation of the Trade War wasn’t a monumental decision that had a rippling effect on other economies outside the United States. There are a variety of implications of this trade war and its effects. A trade war is when a nation enacts quotas or tariffs on imports — and foreign countries tend to retaliate with similar forms of “trade protectionism.”

Similar to what has occurred with Trump’s trade war, as trade wars increase in severity, they can reduce international trade. One of Trump’s main logic points for initiating the Trade War is to reduce the $621 billion U.S. trade deficit. This deficit has been the largest in the world 1975. Therefore, reducing the deficit is part of Trump’s strategy to create more jobs.

One of the biggest reasons for Trump’s desire to reduce this deficit results from American’s extremely high consumption for imported consumer products and automobiles. In fact, on March 8, 2018, Trump announced a 25% tariff on steel and a 10% tariff on aluminum imports. It’s important to highlight that America is the world’s largest steel importer.

Moreover, the largest U.S. trade deficit by country is with China. That being said, there are some possible ways the US can gain if they win the trade war. According to the South China Morning Post, China may revise its industrial policy to allow US companies “reciprocal market access.” Reciprocal marketing describes a situation in which two businesses, in this case countries, “promote each other in order to gain a mutual benefit.” Another option is that the tariffs will cause US companies to have less involvement in China, and disengage, this bringing more manufacturing back into the United States.

3b) According to https://www.poundsterlinglive.com/best-exchange-rates/best-euro-to-us-dollar-history-2019, we have seen an overall declining trend in the conversion of Euros into US Dollars. The euro to U.S. dollar conversion explains how many dollars the euro can buy based on its exchange rate. This directly compares the euro’s value to the dollar’s value. The euro was worth $1.09 on September 30, 2019. This means that one euro could buy 9 cents more in goods and services than one dollar could.

This graph shows us the overall trend of the comparison of the US dollar to the Euro:

It is evident that throughout the year, there has been a slightly downward trend, specifically in the more recent months of 2019, for the conversion of euros to dollars. This reflects the point that the dollar has become slightly stronger in comparison to the Euro.

Another interesting point I found on https://www.thebalance.com/what-is-the-euro-to-dollar-conversion-its-history-3306091, shows the overall trend of the Euro compared to the US Dollar from 1999-2019: 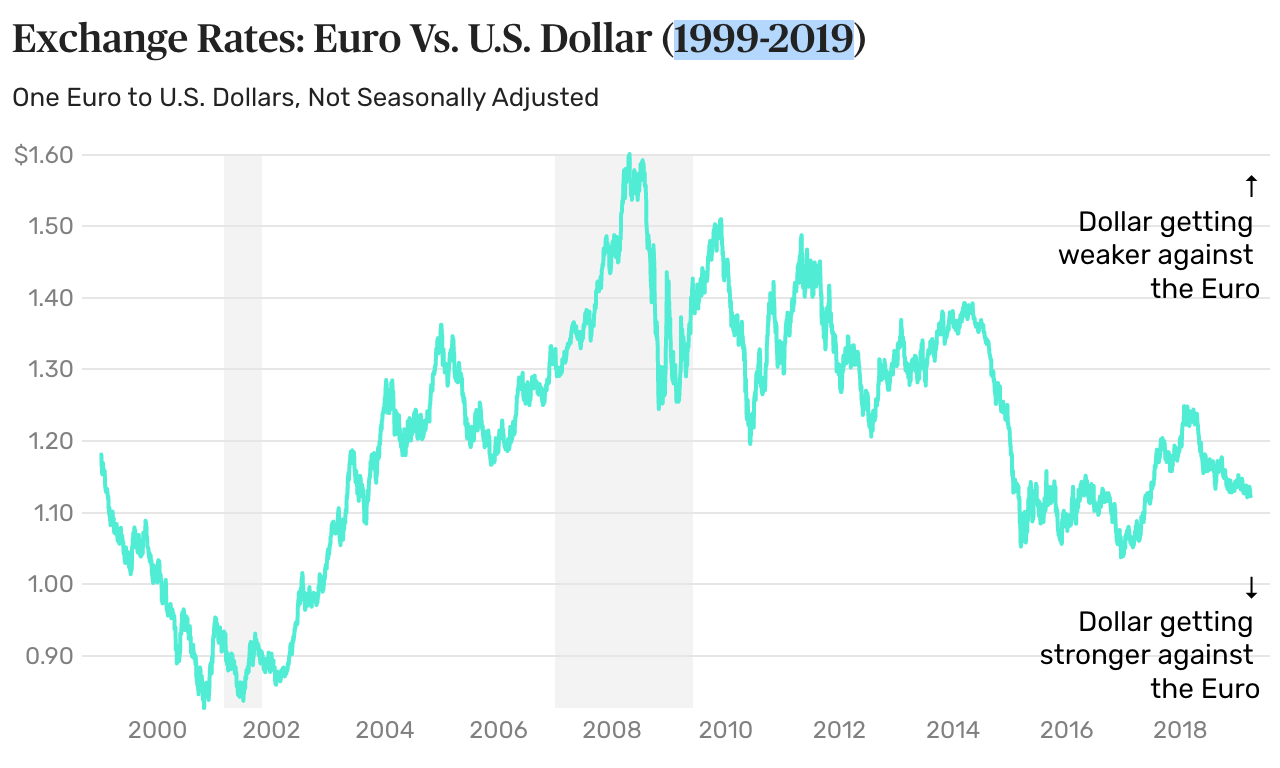 This graph highlights a captivating trend, in that the Euro was significantly stronger against the US Dollar, then decreased heavily until 2015, and is now on a decreasing trend once again at this point in 2019.

According to the same article, On January 2, 2019, the Euro was worth $1.14. However, it declined throughout 2019 as investors “fled to the safety of the U.S. dollar.” Investors were concerned about the fall of global trade due to Trump’s trade war. In fact, by August 16, the Euro had decreased to $1.11. Another way the trade war significantly impacted this conversion is that on April 15, 2019, the Trump administration announced it would impose tariffs on $11 billion in European imports. According to the chapter 20 reading, we see that barriers to trade significantly impact the exchange rate, and specifically in this case — the value of the US dollar. When a country likes the US puts a tariff on a good it imports, one would expect its currency to appreciate — which is what has been happening thus far.

Having a stronger dollar means that US goods exported abroad will cost more in foreign countries, thus leading to foreigners buying a fewer amount of them. Another implication is that a strong dollar can benefit American consumers by making foreign goods cheaper. However, it can hurt American businesses and potentially eliminate some jobs by “cutting both domestic and foreign sales” of the businesses’ products.